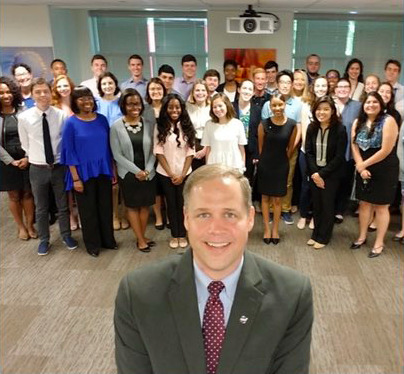 On July 26, 2018, the dedicated day to celebrate contributions of interns across the United States to the government, commercial, and academic sectors, NASA recognized and celebrated its hardworking interns. As home to the most inspiring internships in the federal government, NASA held an event at the NASA Goddard Space Flight Center,  at which the Administrator, Jim Bridenstine, took center stage. This event was live streamed across all NASA Centers and Headquarters. The Administrator brought a deep personal connection to NASA interns, talking about his own experience as an intern, and lauding the contributions of interns to NASA’s mission. Taking questions from interns in the room and around the country, he laid out his vision as NASA Administrator and demonstrated a keen understanding of NASA’s exploration and science activities.

USRA manages the NASA internships program for NASA.  In 2017, USRA supported 1685 interns across all NASA Centers and at NASA Headquarters.