Houston, TX and Columbia, MD—September 20, 2021. The International Astronomical Union has named a lunar crater—the “Henson Crater”— after Dr. Matthew Alexander Henson, an extraordinary explorer who journeyed to the Earth’s North Pole. He led several expeditions to the Arctic and was awarded a medal by the U.S. Navy in 1945 for his Arctic exploration. In 1996, the U.S. Navy commissioned a ship called USNS Henson. Shortly before his death in 1955, he received two honorary degrees from Howard University and Morgan State University. 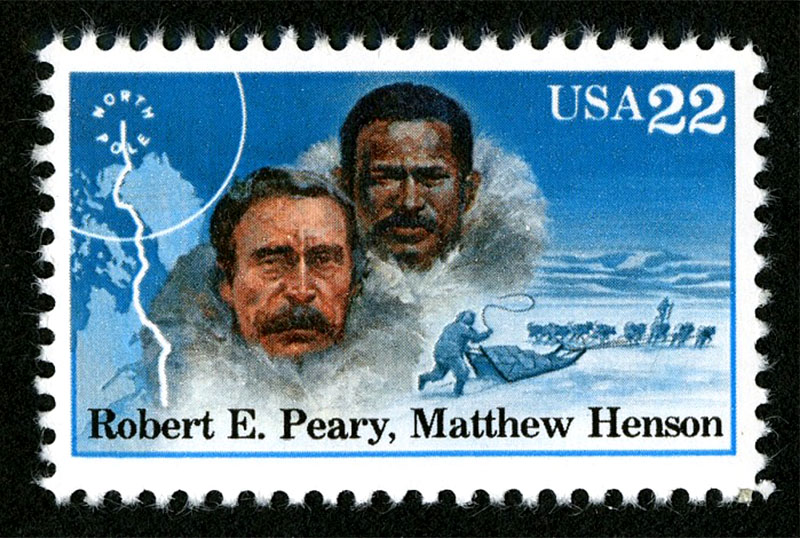 This stamp honors Polar explorers Robert E. Peary and Matthew Henson who undertook perilous expeditions that ended in a triumph at the North Pole which they reached together on April 6, 1909. Credit: USPS

Between the two sites being mapped by the team was a large unnamed impact crater. The crater had spewed debris where astronauts may tread and contains a shadowed crater floor that may host ice that astronauts can use for water, radiation shielding, and propellant. “For future scientific discussions and mission planning, the crater needed a name,” stated Kring. 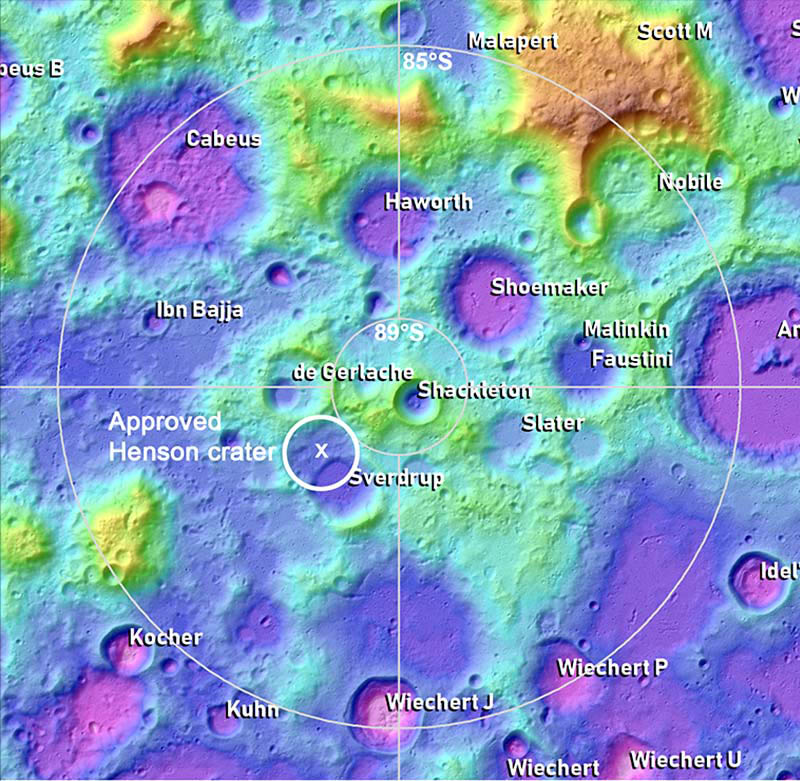 Location of Henson Crater. The crater’s name was proposed by Jordan M. Bretzfelder and David A. Kring. It was approved by the IAU Task Group for Lunar Nomenclature, on 1 September, 2021. Image credit: LPI Lunar South Pole Atlas—David Kring/J. Stopar/H. Meyer.

Jordan Bretzfelder found that the name “Henson” had not yet been applied to a lunar feature, so she and Kring submitted it to the International Astronomical Union’s Task Group for Lunar Nomenclature for consideration.

“Creating an inclusive community and achieving equity in the sciences begins by recognizing the contributions of people from all backgrounds,” said Bretzfelder. “It felt like a disservice that Henson hasn’t been appropriately recognized for his contributions to polar science, and I’m proud to be a part of rectifying that.”

Henson was at the front lines of almost a dozen Arctic expeditions organized by Robert Peary over 18 years, including the one that ultimately reached the North Pole. He wrote a book about those exploits and toured the country speaking about them. Dr. Henson and his wife are buried in Arlington National Cemetery with appropriate honors.

Henson Crater’s location at the south pole of the Moon is in the same region the Artemis program aims to land the next generation of lunar explorers, who will be selected from NASA’s increasingly diverse astronaut pool. A dozen astronauts have already been identified for the Artemis Team.

“It is important to honor the accomplishments of past explorers and to celebrate the diverse talents that will be needed to successfully explore the Moon in the future,” said Kring.

About LPI
The Lunar and Planetary Institute (LPI), operated by Universities Space Research Association, was established during the Apollo program to foster international collaboration and to serve as a repository for information gathered during the early years of the space program. Today, the LPI is an intellectual leader in lunar and planetary science. The Institute serves as a scientific forum attracting world-class visiting scientists, postdoctoral fellows, students, and resident experts; supports and serves the research community through newsletters, meetings, and other activities; collects and disseminates planetary data while facilitating the community’s access to NASA science; and engages and excites, and educates the public about space science and invests in the development of future generations of explorers. The research carried out at the LPI supports NASA’s efforts to explore the solar system. More information about LPI is available at www.lpi.usra.edu.