Columbia, MD—February 22, 2022. For the first time, researchers discovered that magnetic fields assist gravity in directing dust and gas toward the supermassive black hole at a galaxy’s center. Observations from the Stratospheric Observatory for Infrared Astronomy (SOFIA) showed magnetic fields feeding a ring of star formation in the innermost parts of the galaxy NGC 1097, which were complemented by radio polarimetric observations of the field, spiraling toward the black hole. These observations provide evidence that the magnetic fields near black holes at the centers of galaxies may be coming from the large-scale magnetic field in the host galaxy. 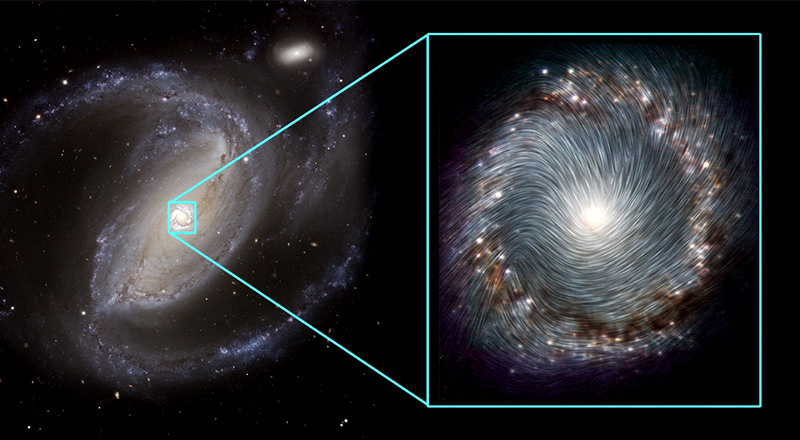 Gas streams outside and within the starburst ring (colorscale) of the spiral galaxy NGC 1097 follow the magnetic field, feeding the supermassive black hole with matter from the galaxy. Credit: NGC 1097: ESO/Prieto et al. (colorscale)

SOFIA researchers studied the shape of NGC 1097’s spiral arms, and found that a black hole at the center of a galaxy plays a role in the galaxy’s death, eating up their surrounding dust and gas and not leaving enough matter behind for new stars to form. Gravity alone, however, is not strong enough to account for all this material transfer on its own.

Theories have proposed that magnetic fields could be helping gravity in feeding black holes, spooning matter in their direction. With the help of observations from the Stratospheric Observatory for Infrared Astronomy, or SOFIA, these theories have now been confirmed. By mapping out the shape of the magnetic fields in the central region of NGC 1097, a spiral galaxy, researchers discovered the magnetic fields assist in directing dust and gas toward the supermassive black hole at the galaxy’s center.

“We can, for the first time, analyze the effect of the magnetic field in the gas flows toward [the central] star-forming regions using SOFIA and the galaxy’s center using radio polarimetric observations,” said Enrique Lopez-Rodriguez, lead author on the recent paper describing NGC 1097’s magnetic fields, published in The Astrophysical Journal.

NGC 1097 has a region of intense star formation toward its center, known as a starburst ring. Because looking at magnetic fields in very dense areas is one of SOFIA’s strengths, Lopez-Rodriguez and his team used SOFIA to probe the dense regions merging into the starburst ring. This was complemented by radio polarimetric observations within the starburst ring, a different type of astronomical observation better suited for studying sparse regions. 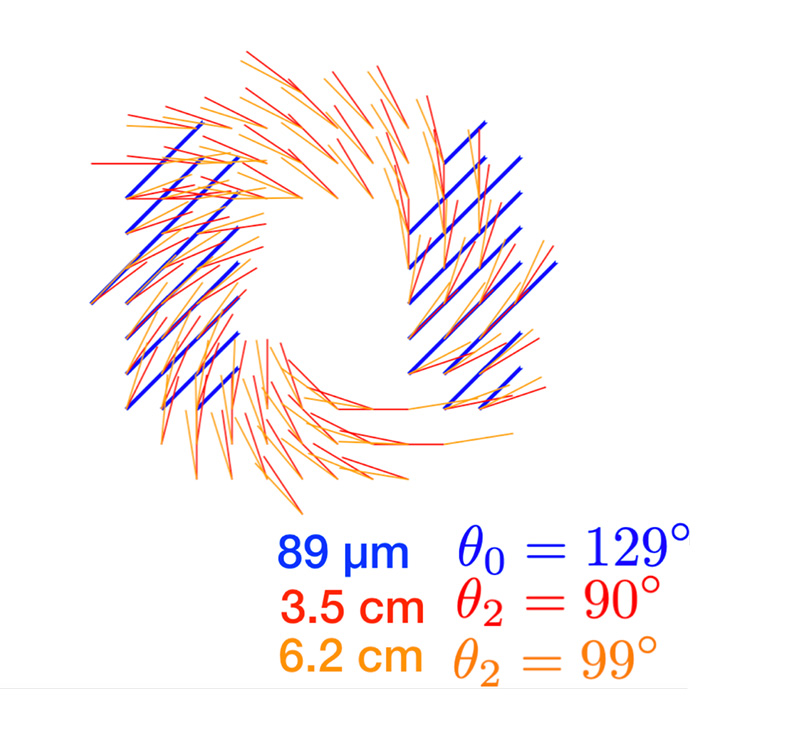 Orientations of the magnetic field within the starburst ring of NGC 1097. The blue lines indicate far-infrared data obtained from SOFIA, while the red and orange lines are radio polarimetric observations. The magnetic field has different configurations at far infrared wavelengths compared to radio wavelengths. Credit: Lopez-Rodriguez et al.

But despite this striking difference, the two are not fully disconnected: The study proves that the magnetic fields in the galaxy help deliver gas and dust to the black hole at its center. Altogether, the large-scale fields follow the shape of NGC 1097’s spiral arms, channeling matter from the arms to the starburst ring in its innermost regions, and from the starburst ring deeper toward the black hole, where it can eat the material up.

This confirms that it is not just gravity that helps a black hole feed on the material in its host galaxy, but magnetic fields also play a role.

“Our observations also provide evidence that the magnetic fields located in the proximity of the black holes at the center of active galaxies may be coming from the large-scale magnetic field in the host galaxy,” Lopez-Rodriguez said.

ABOUT SOFIA
SOFIA is a joint project of NASA and the German Space Agency at DLR.  DLR provides the telescope, scheduled aircraft maintenance, and other support for the mission. NASA’s Ames Research Center in California’s Silicon Valley manages the SOFIA program, science, and mission operations in cooperation with the Universities Space Research Association, headquartered in Columbia, Maryland, and the German SOFIA Institute at the University of Stuttgart. The aircraft is maintained and operated by NASA’s Armstrong Flight Research Center Building 703, in Palmdale, California.

ABOUT USRA
Founded in 1969, under the auspices of the National Academy of Sciences at the request of the U.S. Government, the Universities Space Research Association (USRA) is a nonprofit corporation chartered to advance space-related science, technology and engineering. USRA operates scientific institutes and facilities, and conducts other major research and educational programs. It  engages the university community and employs in-house scientific leadership, innovative research and development, and project management expertise. More information about USRA is available at https://www.usra.edu.