Columbia, MD--April 8, 2021. What happens when two galaxies collide? One of the brightest galaxies in the night sky, Centaurus A, is well known for its distinct “S” shape. This shape is believed to be the result of a clash between a spiral and an elliptical galaxy about 100 million years ago. 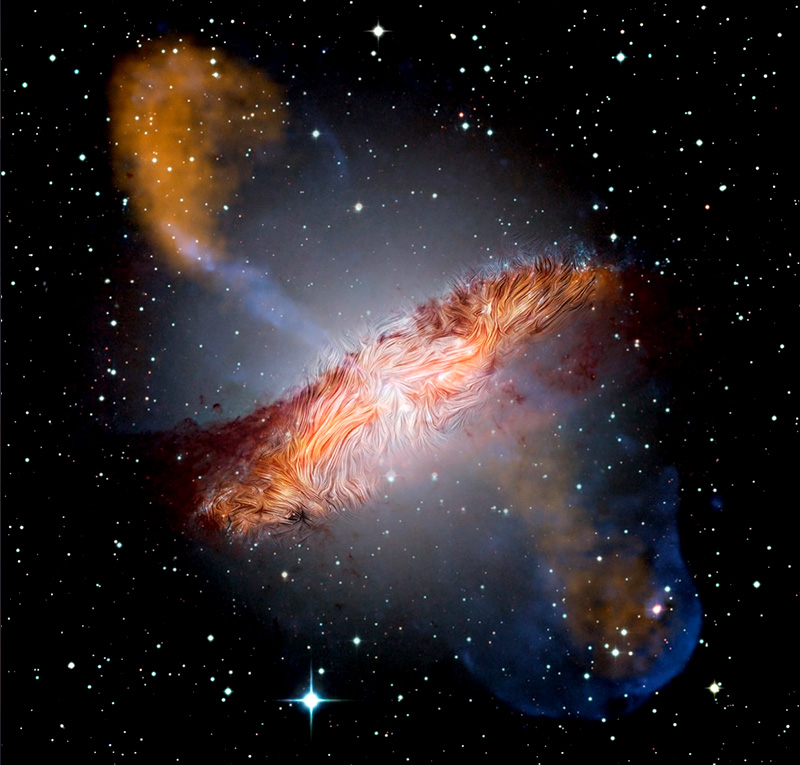 Composite image of Centaurus A. Magnetic fields observed by SOFIA are shown as streamlines over an image of the galaxy taken at visible and submillimeter wavelengths by the European Southern Observatory and Atacama Pathfinder Experiment (orange), X-ray wavelengths from the Chandra X-Ray observatory (blue) and infrared from the Spitzer Space Telescope (dark red). The large-scale magnetic fields, across 1,600 light-years, are parallel to the dust lanes seen in visible light and other wavelengths. However, the fields appear twisted and distorted near the middle. The twisting is a remnant of the spiral-shaped magnetic field from one of the original galaxies, while the active, supermassive black hole at its core adds to the distortions. Image Credits: Optical: European Southern Observatory (ESO) Wide Field Imager Submillimeter: Max Planck Institute for Radio Astronomy/ESO/Atacama Pathfinder Experiment (APEX)/A.Weiss et al X-ray and Infrared: NASA/Chandra/R. Kraft; JPL-Caltech/J. Keene; SOFIA/L. Proudfit

Now, for the first time, scientists have mapped out the invisible magnetic fields pulsing through Centaurus A using infrared light. The results show how the merging of the two original galaxies created a new, reshaped, and contorted galaxy that not only combined the two galaxies’ magnetic fields but amplified their forces.

The new observations made with NASA’s airborne Stratospheric Observatory for Infrared Astronomy, SOFIA , provide new insights into how the early universe may have been shaped by galactic mergers under the influence of their supercharged magnetic fields and were recently published in Nature Astronomy.

“Magnetic fields were key to shaping the early universe, but they did not start out as the forces we know today; somehow they grew stronger over time,” said Dr. Enrique Lopez-Rodriguez a research scientist at Stanford Kavli Institute for Particle Astrophysics and Cosmology in Stanford, California. “Galactic mergers appear to be one of the strengthening mechanisms.”

Since it is relatively close by intergalactic standards, at 13 million light-years away, Centaurus A makes a good candidate to study galactic mergers. SOFIA’s view of the large-scale magnetic fields, which span 1,600 light-years, found they run parallel to the dust lanes that are remnants of the original spiral galaxy.

However, closer to the middle of the galactic disk is a different story.

As the galactic collision triggered a burst of star formation and reshaped the original spiral galaxy, those effects, combined with gravitational forces, distorted the smaller-scale magnetic fields, twisting them and amplifying them. Similar merging processes in the early universe may have transformed relatively weak primordial magnetic fields into the powerful forces observed today that affect how galaxies and stars are created.

Scientists using SOFIA , a joint project of NASA and the German Aerospace Center, previously discovered that magnetic fields are closely aligned with the structure of a spiral galaxy, and can also be disrupted by interactions with a neighboring galaxy. But researchers weren’t sure what would happen to the magnetic fields after a merger in a galaxy with an active black hole at its core.

Centaurus A’s active supermassive black hole appears to be adding to the disorder. Further analysis is needed to learn about the magnetic field around it.

This analysis of magnetic fields will add to upcoming observations by NASA’s James Webb Space Telescope, which will study what's happening deep inside the galaxy’s core, including the black hole’s activity. Scientists previously discovered that magnetic fields can help feed active black holes, so learning if that phenomenon is occurring in Centaurus A, while also having a detailed view of the material falling toward the black hole from Webb, will give scientists a more comprehensive understanding of this unusual galaxy.