Dr. Erick Young, who served as Director, Science Mission Operations for SOFIA until last year, spoke at USRA HQ about the uniqueness of the Stratospheric Observatory for Infrared Astronomy. He covered a wide range of topics related to SOFIA, including lifecycle of matter in galaxies, the history of water on Mars, the galactic center, and most interestingly, SOFIA's instrumentation which enables much of the science. "SOFIA's instrumentation and its continual enhancement is what drives it capability," said Dr. Young.

Dr. Young also described the successful observations of the occultation of a background star by Pluto. The observations required SOFIA to be at a precise place and time over the ocean to catch the shadow. "One of the great advantages of SOFIA is that it goes where the science is... and all future studies of the atmosphere of Pluto will rely on occultation observations, and SOFIA is unique because of its mobility and state-of-the-art instrumentation."

The SOFIA complement of instruments include 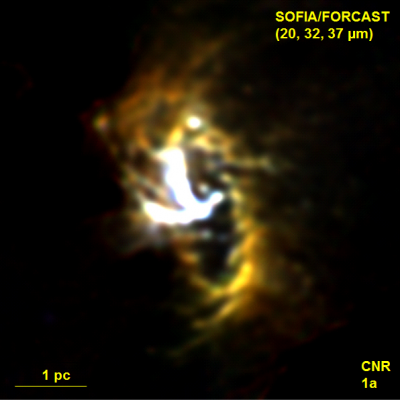 With these, SOFIA can observe areas of the spectrum that are not observable with other telescopes.The photo on the right shows FORCAST's observation of the inner edge of the Galactic Center

Dr. Young's presentation concluded with some very interesting legacies of SOFIA namely, the