The sun, like all stars, was born in a giant cold cloud of molecular gas and dust. It may have had dozens or even hundreds of stellar siblings – a star cluster – but these early companions are now scattered throughout our Milky Way Galaxy. Although the remnants of this particular creation event have long since dispersed, the process of star birth continues today within our galaxy and beyond. Star clusters are conceived in the hearts of optically dark clouds where the early phases of formation have historically been hidden from view. But these cold, dusty clouds shine brightly in the infrared, so telescopes like the Stratospheric Observatory for Infrared Astronomy, SOFIA, can begin to reveal these long-held secrets. 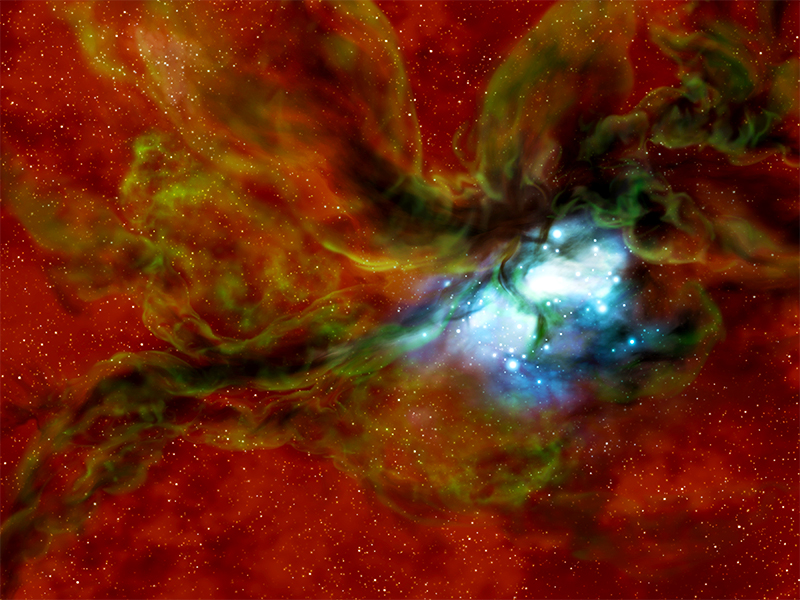 Artist’s impression of a star cluster forming from the collision of turbulent molecular clouds, which appear as dark shadows in front of the background galactic star field. The molecular clouds are surrounded by atomic envelopes, here illustrated in green, which have been detected via emission from ionized carbon by SOFIA. The spatial offset and motions of these envelopes confirm predictions of simulations of cloud collisions. Image Credit: NASA/SOFIA/Lynette Cook

Astronomers used SOFIA’s instrument, the German Receiver for Astronomy at Terahertz Frequencies, known as GREAT, to map the [C II] ground-state fine-structure line at 157.7 µm for an entire filamentary infrared dark cloud known as IRDC H. Such observations are possible because of the scan-mapping agility of the SOFIA telescope and the multi-beam upgrade to the Terahertz receiver. Those data reveal motion within the cloud that offer new evidence that star clusters form through collisions

"Stars are powered by nuclear reactions that create new chemical elements," said Thomas Bisbas, a postdoctoral researcher at the University of Virginia, Charlottesville, Virginia, and the lead author on the paper describing these new results. "The very existence of life on earth is the product of a star that exploded billions of years ago, but we still don't know how these stars — including our own sun — form."

The material in the cloud is molecular, but the carbon can be ionized in the cloud envelopes by diffuse interstellar radiation from nearby stars. The ionized carbon [CII] images trace the material surrounding the filament. The authors showed that the [C II] emission is spatially offset from the dark molecular filament and that the envelope is dynamically offset, with a velocity shift of 3 km/s between [C II] (envelope) and 13CO (molecular cloud).

These offsets are signatures of the filament formation process. Synthetic observations from the 3D MHD code produced simulations of colliding and non-colliding molecular clouds along the line-of-sight. In the colliding case, there is an offset of a few pc between [CII] emission and the column density peaks, but there is no such offset in the non-colliding case. The authors therefore conclude that molecular filaments are likely to form from cloud-cloud collisions rather than direct collapse.

“These star formation models are difficult to assess observationally,” said Jonathan Tan, a professor at Chalmers University of Technology in Gothenburg, Sweden, and the University of Virginia, and a lead researcher on the paper. “We’re at a fascinating point in the project, where the data we are getting with SOFIA can really test the simulations.”

While there is not yet scientific consensus on the mechanism responsible for driving the creation of star clusters, these SOFIA observations have helped scientists take an important step toward unravelling the mystery. This field of research remains an active one, and these data provide crucial evidence in favor of the collision model. The authors expect future observations will test this scenario to determine if the process of cloud collisions is unique to this region, more widespread, or even a universal mechanism for the formation of star clusters.

“Our next steps are to use SOFIA to observe a larger number of molecular clouds that are forming star clusters,” added Tan. “Only then can we understand how common cloud collisions are for triggering star birth in our galaxy.”

SOFIA is a Boeing 747SP jetliner modified to carry a 106-inch diameter telescope. It is a joint project of NASA and the German Aerospace Center, DLR. NASA’s Ames Research Center in California’s Silicon Valley manages the SOFIA program, science and mission operations in cooperation with the Universities Space Research Association headquartered in Columbia, Maryland, and the German SOFIA Institute (DSI) at the University of Stuttgart.

The aircraft is maintained and operated from NASA’s Armstrong Flight Research Center Hangar 703, in Palmdale, California.