Center for Lunar Science and Exploration, led by USRA's David Kring, among eight teams selected by NASA to study the Moon and beyond

Center for Lunar Science and Exploration, led by USRA's David Kring, among eight teams selected by NASA to study the Moon and beyond 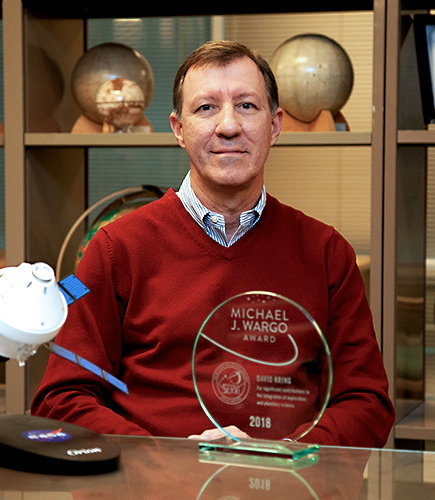 USRA’s Dr. David Kring, Principal Scientist at the Lunar and Planetary Institute and founding Principal Investigator of the Center for Lunar Science and Exploration will continue to lead the research effort at the Center, along with Deputy Team Lead, Dr. Debra Needham, at NASA Marshall Space Flight Center (and former post-doc for CLSE). This effort will track, through modeling and geophysical analyses, the distribution and form of volatiles from the early solar system to the formation of the Moon and subsequent evolution to today. The team will analyze the volatile cycle of the Moon to determine the overall source and loss mechanisms and how we can use these resources.

Dr. Louise Prockter, USRA Director and Director of the LPI noted, “The CLSE team adeptly bridges the gap between science and exploration. Their work over the next few years will provide valuable input to NASA’s goal of sending humans back to the Moon.”

She continued to say, “Selection of CLSE is wonderful news, and is a testament to David’s hard work, and that of his postdocs, interns, and colleagues at Johnson Space Center and other partner institutions.”

SSERVI selected the eight new research teams via peer review from a pool of 24 competitive proposals.

SSERVI will support the new teams for five years at a combined total of about $10.5 million per year, funded by NASA’s Science and Human Exploration and Operations Mission Directorates. They will join four current SSERVI teams to conduct fundamental and applied research about the Moon, near Earth asteroids, and the Martian moons Phobos and Deimos and their near space environments. Work will take place in cooperation with U.S and international partners.

Founded in 1969, under the auspices of the National Academy of Sciences at the request of the U.S. Government, the Universities Space Research Association (USRA) is a nonprofit corporation chartered to advance space-related science, technology and engineering. USRA operates scientific institutes and facilities, and conducts other major research and educational programs, under Federal funding. It engages the university community and employs in-house scientific leadership, innovative research and development, and project management expertise. More information about USRA is available at www.usra.edu.

About LPIThe Lunar and Planetary Institute (LPI), operated by Universities Space Research Association, was established during the Apollo program to foster international collaboration and to serve as a repository for information gathered during the early years of the space program. Today, the LPI is an intellectual leader in lunar and planetary science. The Institute serves as a scientific forum attracting world-class visiting scientists, postdoctoral fellows, students, and resident experts; supports and serves the research community through newsletters, meetings, and other activities; collects and disseminates planetary data while facilitating the community’s access to NASA science; and engages and excites, and educates the public about space science and invests in the development of future generations of explorers. The research carried out at the LPI supports NASA’s efforts to explore the solar system. More information about LPI is available at www.lpi.usra.edu.