Houston, TX and Columbia, MD—August 10, 2020. Data from NASA's recent Dawn mission show that salty groundwaters in Occator Crater on Ceres were driven to the surface by impact heat and formed low mounds and pits, as well as thin sheets of sodium-carbonate minerals from multitudes of small hot-spring seeps.

Using a combination of stereo images and detailed topographic maps derived from Dawn observations, scientists from the Lunar and Planetary Institute (LPI) and other institutional participants on the Dawn project have mapped the distribution, dimensions, and structures of volatile-related features in Occator, and deduced their origins.

The findings from this study, led by USRA's Dr. Paul Schenk, a participating scientist for the Dawn mission with the LPI (managed by Universities Space Research Association), confirms that hydrothermal-related features are common on the floor of Occator, but are very different from those seen on Mars by other spacecraft.

“We see numerous low mounds and pits with bright deposits on the floor of Occator, but they do not resemble the densely packed, large, deep pits found on Martian craters,” reports Dr. Schenk. “This difference in morphology is likely related to the more water-rich composition of Ceres’ crust.”

The findings appear in a special collection of papers on Dawn’s high-resolution observations published by Nature Astronomy, Nature Geoscience, and Nature Communications on August 10.

NASA's Dawn spacecraft gave scientists extraordinarily close-up views of the dwarf planet Ceres, which lies in the main asteroid belt between Mars and Jupiter. By the time the mission ended in October 2018, the orbiter had dipped to less than 22 miles (35 kilometers) above Ceres’ surface, revealing crisp details of the bright sodium-carbonate deposits and other well preserved features on the floor of Occator Crater (57-miles across, or 92-kilometers), Ceres’ freshest large crater.

Dawn’s high-resolution observations of Occator, at pixel scales as good as 3.5 meters, are our first opportunity to examine in detail the formation of features and deposits in an impact driven hydrothermal system beyond Earth or Mars. Such systems, which are strong candidates for habitable environments on early Earth, are thus of astrobiological importance.

Long before Dawn arrived at Ceres in 2015, telescope views had shown that it had diffuse bright regions, but their nature was unknown. From its close orbit, Dawn captured images of two distinct, highly reflective areas within Occator Crater, which were officially named Cerealia Facula and Vinalia Faculae. ("Faculae" means bright areas.) The bright carbonate deposits in Vinalia Faculae (a series of large bright spots 2 to 5 kilometers across on the eastern floor of Occator) also came in for scrutiny. Dawn’s early orbital mapping revealed these features, but without enough detail to show how they formed. One theory was that the Faculae formed as deposits from hot or warm springs; on Earth, many such springs make extensive deposits of carbonate minerals (for example, in Yellowstone National Park).

Perspective view of domes and pits formed by groundwater movement in the floor of Ceres’ Occator Crater. Credit: NASA/JPL-Caltech/UCLA/MPS/DLR/IDA/USRA-LPI 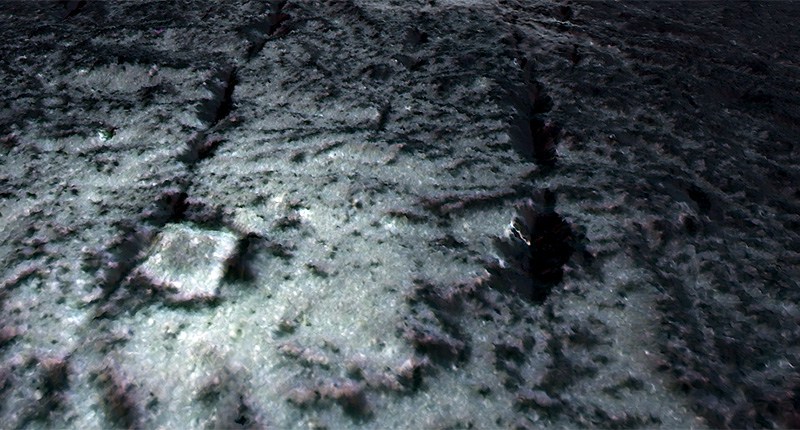 Analysis of Dawn’s extended mission high-resolution data show that the bright spots at Vinalia Faculae formed as thin surface coatings (less than 10 meters thick in most locations). These deposits were formed by effusion of warm brine solutions at hundreds or even thousands of individual sites, where dissolved carbonates and other minerals rapidly came out of solution and crystallized on the surface as the waters evaporated. Where these brine seeps and deposits were most abundant, the small bright spots of individual seeps coalesced to form the larger bright patches of the Vinalia Faculae complex.

While related features have been spotted on Mars, this is the first time such features driven by groundwater and hydrothermal systems have been observed on a dwarf planet or any other body.

“These observations show that the floor of Ceres’ Occator Crater underwent a lot of activity after impact and that the processing of groundwater driven by impact heat continued for some time,” says Dr. Schenk. “Our mapping with Dawn’s amazing stereo images also shows that hydrothermal activity after large impacts on water-rich bodies each has a distinctive style, directly related to the unique composition of each planet, including the dwarf planet Ceres.”