Astronomers Revisiting Age of Westerlund 1 in the Milky Way Galaxy

Astronomers Revisiting Age of Westerlund 1 in the Milky Way Galaxy

Columbia, MD—August 25, 2021. A new study of Westerlund 1, a compact young super star cluster in the Milky Way galaxy, about 2.6 kpc (8480 light years) away from Earth, is challenging previously established theories of cluster formation and evolution. 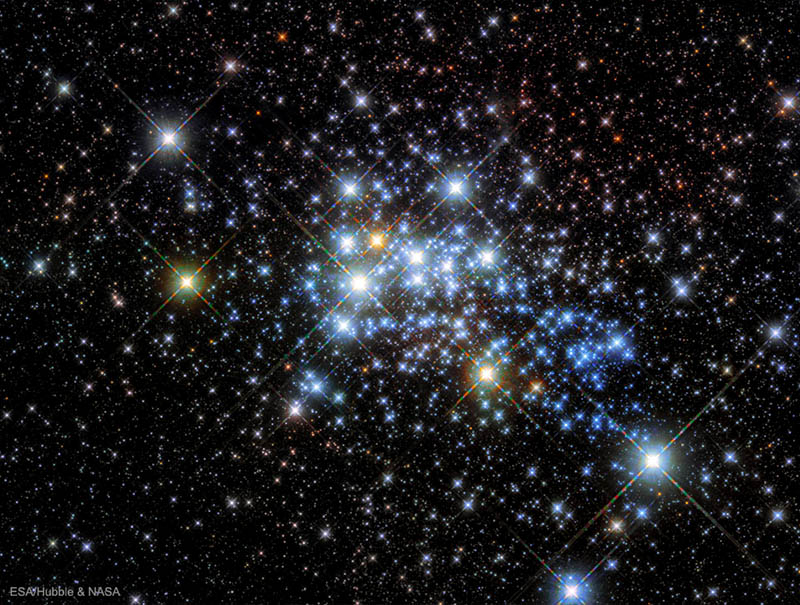 Image of young star cluster Westerlund 1 (taken by the Hubble Space Telescope) toward the southern constellation of the Altar. Westerlund 1 is home a variety of the largest and most massive stars known, including red, yellow and blue supergiants as well as an exotic object known as a magnetar. Westerlund 1 is relatively close-by for a star cluster at a distance of 15,000 light years, giving astronomers a good laboratory to study the development of massive stars. Image Credit: ESA/Hubble/NASA

Stars in clusters are thought to form all at once, in one massive collapse triggering stars to form from clumps of gas or dust. These clumps can have different sizes ranging from our Sun’s size to many times greater. Clusters are thought to be pristine laboratories of star formation and evolution since they theoretically all have the same star time.

This means that all stars in a cluster are born at the same time from the same material. Since each prenatal cloud will contain a different amount of material, each star will be born with a different mass. Those that formed from larger clouds, the more massive stars, are those which live the shortest lives - quickly burning through their fuel and dying as energetic explosions known as supernovae. Those with lower masses, similar to our Sun, will live far longer, slowly using their fuel for hundreds of millions of years.

The new study indicates that not all of the stars in Westerlund 1 formed at the same time, but likely over a period of millions of years. This result is challenging to astronomers’ current star cluster formation paradigms.

“By looking at clusters we can see the evolution of stars in action”, says Emma Beasor, a postdoctoral researcher at NOIRLab in Tucson, Arizona and lead author on a recent paper accepted for publication in The Astrophysical Journal. “We can follow stars of different masses and learn how the mass they are born with affects how they will end their lives.”

One particularly interesting cluster, Westerlund 1, has long been considered the most massive cluster in the local Universe, thought to contain a total mass of more than 10,000 times that of our Sun. In addition, Westerlund 1 is used as a benchmark object for studies of distant starburst galaxies and for calibrating stellar evolutionary models. Westerlund 1 also contains a high number of rare massive stars, including red, yellow and blue supergiants as well as an exotic object known as a magnetar. This unprecedented diversity makes Westerlund 1 truly unique.

The presence of a large number of massive stars means the cluster is young enough that these objects have not yet gone supernova, suggesting that Westerlund 1 formed around 4 million years ago, a cosmic newborn by astronomical standards. However, new data from NASA’s Stratospheric Observatory for Infrared Astronomy (SOFIA) has revealed a complicated evolutionary past for Westerlund 1.

“One of the most important parameters we need to measure is the brightness of a star, since this can tell us how old or young the star is,” adds Emma Beasor. “Different stars emit light in different wavebands that we can’t see with our naked eye.”

Red supergiant stars, such as Betelgeuse, emit most of their radiation as infrared light.

This new age estimation hints at a complicated past for Westerlund 1. The presence of the young, hot stars implies an age of ~4 million years. If the cluster were truly 10 million years old, these stars would all have ended their lives as supernova explosions many years before the red supergiants had time to form. Instead, researchers conclude that Westerlund 1 was not born in a simple, single starburst, but rather via a sustained period of star formation, likely over a period of millions of years. If this is the case, the stars in Westerlund 1 cannot all be as young or as massive as once thought.

Although Westerlund 1 can no longer serve as a benchmark for studies of distant starburst galaxies or stellar evolutionary models, it highlights the complexity of the astrophysical systems we struggle to understand and reminds us how wondrous and surprising the universe can be.