A Subterranean Ecosystem in the Chicxulub Crater

A Subterranean Ecosystem in the Chicxulub Crater

Houston, TX and Columbia, MD—October 30, 2020. A new study reveals that the Chicxulub impact crater and its hydrothermal system hosted a subterranean ecosystem that could provide a glimpse of Earth’s primordial life. 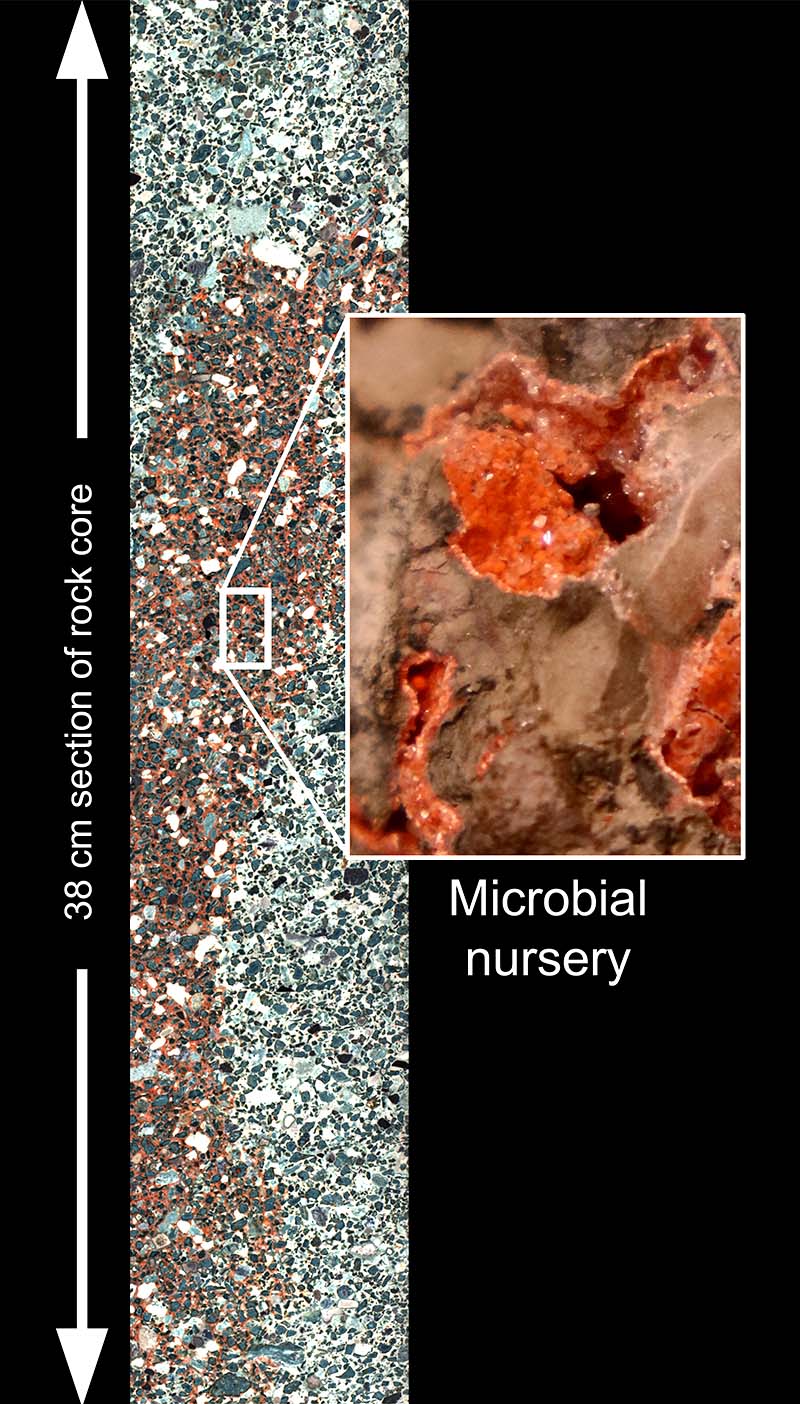 Section of the Chicxulub core with the hydrothermal minerals dachiardite (bright orange) and analcime (colorless and transparent). The minerals partially fill cavities in the rock that were niches for microbial ecosystems. This is a composite illustration of core section 0077-53R-3 and a closeup image of a portion of core section 0077-63R-2. Credit: David A. Kring of the USRA's Lunar and Planetary Institute.

The Chicxulub impact crater, roughly 180 kilometers in diameter, is the best-preserved large impact structure on Earth. It is also the best example of the types of impact craters that were produced on Earth during a period of heavy bombardment more than 3800 million years ago.

Impact events during that period, called the Hadean by geologists, were common and often immense, and produced craters thousands of miles across. Previous research suggested that the largest of those impact events episodically vaporized the oceans and enveloped the Earth in a steamy, rock-vapor-filled atmosphere. During those times, the surface of the Earth was considered uninhabitable.

When life could not exist on the Earth’s surface, scientists wondered, could it have lurked beneath crater floors in subterranean systems of hydrothermal fluids that streamed through rock fractured by the impact event? A principal author of that concept, Universities Space Research Association’s David Kring at the Lunar and Planetary Institute (LPI), called that concept the impact origin of life hypothesis.

Earlier this year, an international team of scientists, led by Dr. Kring, answered part of that question. They showed that the Chicxulub crater hosted a vast hydrothermal system that persisted for hundreds of thousands of years, if not millions of years. That important finding was revealed in rock core extracted from the peak ring of the crater by an expedition supported by the International Ocean Discovery Program and International Continental Scientific Drilling Program.

In a new study, released today in the journal of Astrobiology, Kring and his colleagues, Dr. Martin Whitehouse of the Swedish Museum of Natural History and Dr. Martin Schmieder of Neu-Ulm University in Germany, show that the system also harbored life. From 15,000 kilograms (33,000 pounds) of rock recovered from a 1.3-kilometer-deep borehole, the authors located tiny spheres of the mineral pyrite, only 10 millionths of a meter in diameter. Isotopes of sulfur in the mineral showed the spheres of pyrite, called framboids, were formed by a microbial ecosystem adapted to the hot mineral-laden fluid of a hydrothermal system that coursed through the shattered peak ring of the Chicxulub impact crater. Life in the system extracted energy – or fed from – chemical reactions that occurred in the fluid-filled rock system. The microbes took advantage of sulfate, which was in the fluid, being converted to sulfide, which was preserved as pyrite, providing the energy that the microbes needed to thrive. The sulfate-reducing, hot-water (thermophilic) organisms were like some of the bacteria and archaea found at Yellowstone and other hydrothermal systems. 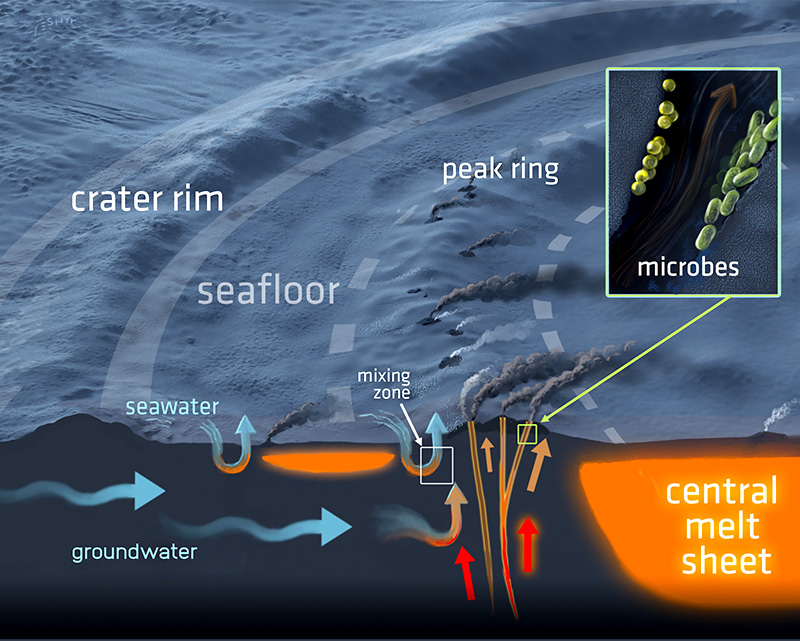 A three-dimensional cross-section of the hydrothermal system in the Chicxulub impact crater and its seafloor vents. The system has the potential for harboring microbial life. Illustration by Victor O. Leshyk for the Lunar and Planetary Institute.

The search for that evidence has taken twenty years, since a link between Chicxulub, the life-giving potential of an impact-cratered hydrothermal system, and the origin of life on Earth was first postulated.

In a series of studies over those two decades, scientists showed the Chicxulub crater had a porous, permeable subsurface environment; that the crater hosted a vast hydrothermal system; and, finally, in the current study released today, that the system hosted a microbial ecosystem. The new finding is an important milestone and suggests that impact sites during the Hadean could have hosted similar systems that provided niches for the early evolution of life on our planet.

This research was funded by the National Science Foundation.