A Stellar Merger's Snapshot in Time

A Stellar Merger's Snapshot in Time

Columbia, MD—December 17, 2021. Eleven years after it was last observed and 17 years after a stellar merger occurred, SOFIA looked at V838 Monocerotis, or V838 Mon, a binary star system about 19 thousand light-years away from Earth, capturing a snapshot in time of its makeup. It confirmed that the dust chemistry of this star system has changed significantly over the course of nearly two decades following the merger, particularly over the past decade. This provided a history we otherwise cannot look at and offered an archaeological view of its evolution. 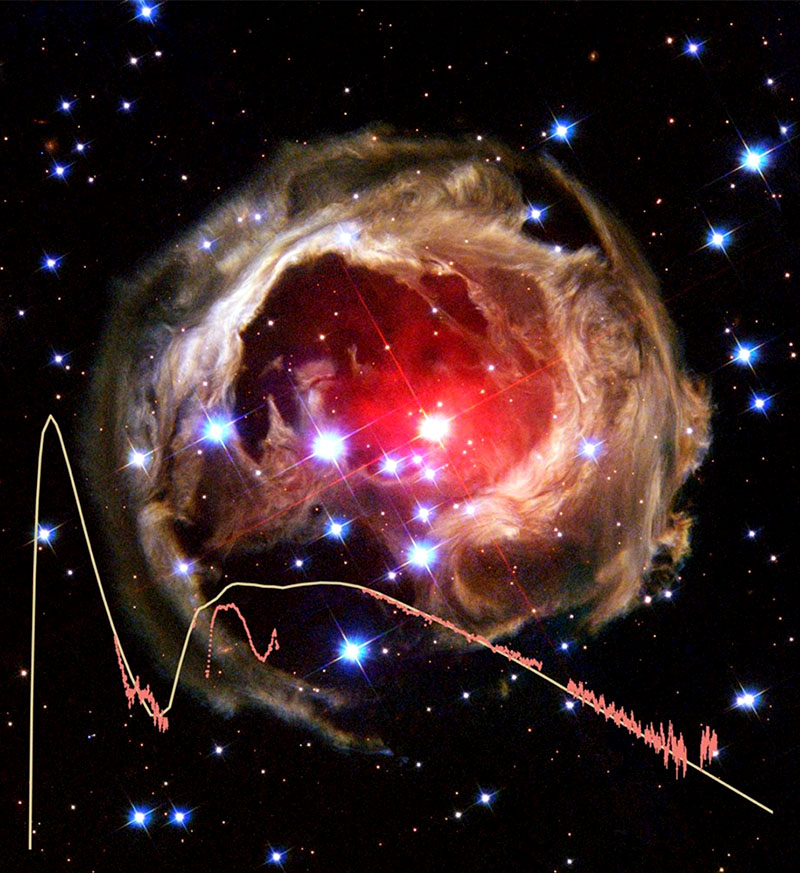 Because V838 Mon is quite bright and can saturate other telescopes, SOFIA is the only observatory capable of observing it at infrared wavelengths required to monitor the after effects of such stellar mergers and associated processes. The researchers used SOFIA’s FORCAST camera, which allows for low-resolution spectroscopy and deep imaging of bright objects. The results were reported in The Astronomical Journal.

“It’s very rare to see this progression of dust transformation in objects that is predicted to happen,” said Charles Woodward, astrophysicist at the University of Minnesota and lead author on the paper describing the observation. “To catch one is pretty cool.”

Material expelled as a result of a stellar merger may provide hints about how our own early solar system evolved. Understanding how dust condensation occurs from material originally in a hot gas phase is related to how rocky planets, like Earth, form out of the gas and debris that surround young stars.

“It’s these small, micron-sized pieces of material that eventually build into planets like the one we sit on,” Woodward said.

In environments like this that are conducive to forming dust, the way that the different materials are incorporated and condense affects the geology of the final product. This is especially true when aluminum – which is very chemically active and can quickly deplete its surrounding oxygen – is involved. In V838 Mon, the chemical composition of the dust has changed from primarily comprising of alumina components in 2008 to being dominated by silicates, as the alumina bond with their oxygen neighbors. Notably, this progression can be seen in real time.

“If we look at theoretical condensation sequences for how this is supposed to work, this is an example of us being able to test those hypotheses,” Woodward said.

While most astronomical events occur on a timescale of millions of years, this is one example of an astronomical event on human-timescale, reminding us that immense changes can occur in a very short period of time.

“Often when people think about astronomy, things are in stasis and they take millions and billions of years to occur. This was in the blink of an eye that the source went through evolution,” Woodward said. “Certain astrophysical phenomena are really dynamic.”

ABOUT SOFIA
SOFIA is a joint project of NASA and the German Space Agency at DLR. DLR provides the telescope, scheduled aircraft maintenance, and other support for the mission. NASA’s Ames Research Center in California’s Silicon Valley manages the SOFIA program, science, and mission operations in cooperation with the Universities Space Research Association, headquartered in Columbia, Maryland, and the German SOFIA Institute at the University of Stuttgart. The aircraft is maintained and operated by NASA’s Armstrong Flight Research Center Building 703, in Palmdale, California.

ABOUT USRA
Founded in 1969, under the auspices of the National Academy of Sciences at the request of the U.S. Government, the Universities Space Research Association (USRA) is a nonprofit corporation chartered to advance space-related science, technology, and engineering. USRA operates scientific institutes and facilities, and conducts other major research and educational programs. USRA engages the university community and employs in-house scientific leadership, innovative research and development, and project management expertise. More information about USRA is available at www.usra.edu.