Houston, TX and Columbia, MD—May 29, 2020. A new study reveals the Chicxulub impact crater may have harbored a vast and long-lived hydrothermal system after the catastrophic impact event linked to the extinction of dinosaurs 66 million years ago.

The Chicxulub impact crater, roughly 180 kilometers in diameter, is the best preserved large impact structure on Earth and a target for exploration of several impact-related phenomena. In 2016, a research team supported by the International Ocean Discovery Program and International Continental Scientific Drilling Program drilled into the crater, reaching a depth of 1,335 meters (> 1 kilometer) below the modern-day sea floor. The team recovered rock core samples which can be used to study the thermal and chemical modification of Earth’s crust caused by the impact. The core samples show the crater hosted an extensive hydrothermal system that chemically and mineralogically modified more than 100,000 cubic kilometers of Earth’s crust.

The lead author, Universities Space Research Association’s David Kring at the Lunar and Planetary Institute (LPI), explains,“Imagine an undersea Yellowstone Caldera, but one that is several times larger and produced by the staggering impact event that resulted in the extinction of the dinosaurs.”

The team found evidence that subsurface rivers of water were heated and driven upwards towards the boundary between the floor of the impact crater and the bottom of the Yucatán sea. The hot water streamed around the edges of an approximate 3-kilometer thick pool of impact-generated magma, percolated through fractured rock, and rose to the seafloor where it vented into the sea. The hot water system was particularly intense in an uplifted range of mountains on the seafloor that form a 90 kilometer-diameter ring around the center of the crater. The rock core recovered from that peak ring is cross-cut by fossil hydrothermal conduits that are lined with multi-colored minerals, some, appropriately enough, a fiery red-orange color. Nearly two dozen minerals precipitated from the fluids as they coursed through the rock, replacing the rock’s original minerals. 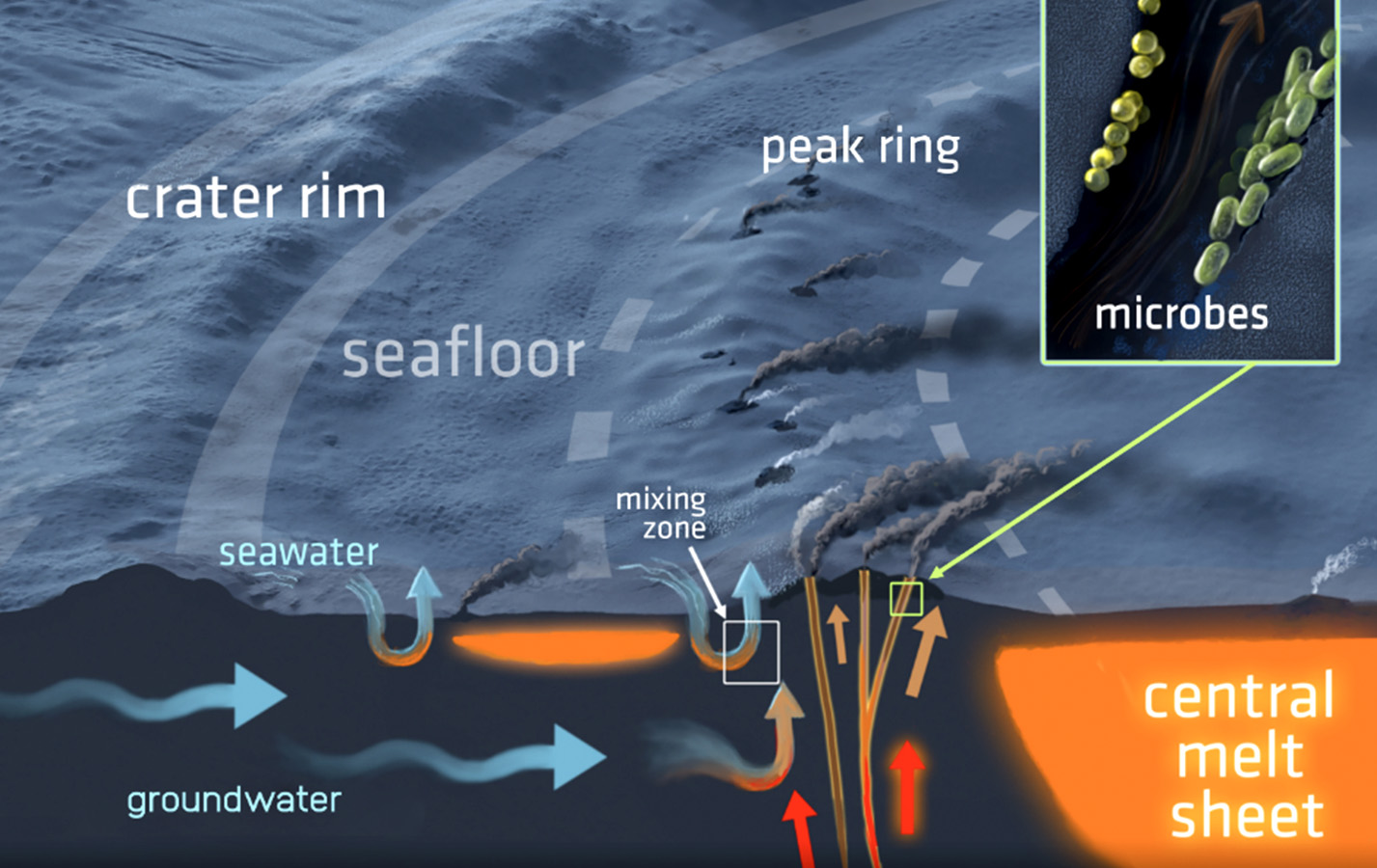 A Three-dimensional cross-section of the hydrothermal system in the Chicxulub impact crater and its seafloor vents. The system has the potential for harboring microbial life. Illustration by Victor O. Leshyk for the Lunar and Planetary Institute.

The peak ring of the crater is composed of fractured granite-like rocks that were uplifted from a depth of approximately 10 kilometers by the impact. Those rocks are covered by porous and permeable impact debris. Both rock units are affected by the hydrothermal system. “Hot-fluid alteration was most vigorous in the permeable impact debris, but garnet crystals, indicating high temperatures, were found at different levels throughout the core,” explains former LPI Postdoctoral Researcher Martin Schmieder who recently assumed a new post at Neu-Ulm University in Germany.

Minerals identified in the new rock core indicate the hydrothermal system was initially very hot with temperatures of 300 to 400 °C. Such high temperatures indicate the system would have taken a long time to cool. The team determined the cooling time using a geomagnetic polarity clock. "Our results indicate that tiny magnetic minerals were created in the Chicxulub crater due to chemical reactions produced by a long-lived hydrothermal system. These minerals appear to have recorded changes in the Earth's magnetic field as they formed. Their magnetic memories suggest that hydrothermal activity within the crater persisted for at least 150,000 years," says co-author Sonia Tikoo from Stanford University.

Although the expedition only tapped the hydrothermal system in one location, Kring says,“The results suggest there was an approximately 300 kilometer-long string of hot water vents on the peak ring and additional vents scattered across the crater floor as impact melt cooled. Importantly, such hydrothermal systems may have provided habitats for microbial life.” Yellowstone’s volcanic hydrothermal systems are rich with microbial organisms and imply impact-generated hot water systems have the same biologic potential. Kring concludes, “Our study of the expedition’s rock core from a potential deep Earth habitat provides additional evidence for the impact-origin of life hypothesis. Life may have evolved in an impact crater.”

The extent and longevity of the Chicxulub hydrothermal system suggest that impact-generated systems early in Earth history may have provided niches for life. Thousands of these types of systems were produced during a period of impact bombardment more than 3.8 billion years ago. As each system cooled, it would have provided an environment rich in materials suitable for thermophilic and hyperthermophilic organisms.

This research was funded by the National Science Foundation.

Operated by Universities Space Research Association, LPI was established during the Apollo program to foster international collaboration and to serve as a repository for information gathered during the early years of the space program. Today, the LPI is an intellectual leader in lunar and planetary science. The Institute serves as a scientific forum attracting world-class visiting scientists, postdoctoral fellows, students, and resident experts; supports and serves the research community through newsletters, meetings, and other activities; collects and disseminates planetary data while facilitating the community’s access to NASA science; and engages and excites, and educates the public about space science and invests in the development of future generations of explorers. The research carried out at the LPI supports NASA’s efforts to explore the solar system. More information about LPI is available at www.lpi.usra.edu.