A Solution to High-Velocity Cloud Mystery

A Solution to High-Velocity Cloud Mystery

Columbia MD, 2022--September 29, 2022.  The high-velocity, neutral hydrogen feature known as MI may be the result of a supernova that took place about 100,000 years ago at a distance of 163 pc. New research led by Universities Space Research  Association (USRA) has provided a vital clue to unlocking this  astronomical mystery that dates back to the middle of the 20th century. 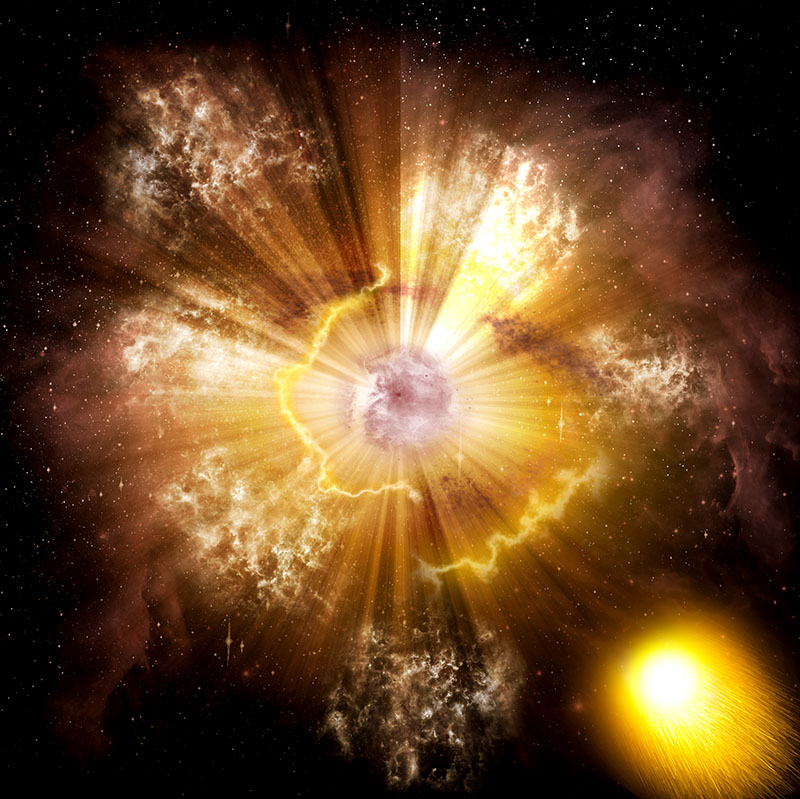 Artist’s impression of the complexity, dynamics, and destruction of the supernova explosion in the binary star system, 56 Ursa Majoris. The blast evacuated the low-velocity, λ21-cm neutral hydrogen cavity, stripped the companion star (lower right) of its outer layers, and sent the high-velocity cloud, MI, hurtling outward at 120 km/s. MI itself is seen in silhouette against the explosion, as if the central star were wearing a mask. Image credit: Leslie Proudfit

High-velocity clouds (HVCs) are concentrations of hydrogen gas found all over the sky, sometimes in large complexes. They are defined by their anomalous velocities, which are inconsistent with the regular rotation of the Milky Way Galaxy.

The origins of HVCs are a mystery, mainly because their distances are unknown. Most models place them in the Galactic Halo, kiloparsecs from the Sun. At these vast distances, some of the complexes would contain millions of solar masses and contribute significantly to star formation and Galactic evolution. Some promising models – like old supernova explosions – are rejected simply because they cannot generate enough energy to propel this much mass to the observed high velocities. But what if HVCs, or at least some of them, were much closer?

“Distance is the clue to understanding HVCs,” said Joan Schmelz, an astronomer at USRA and the lead author on a recent paper  to be published in The  Astrophysical  Journal.  “Many of the mysteries would be solved if we just knew how far away they are.”

Researchers concentrated on a HVC-designated MI. They found that MI may be the result of a supernova that took place about 100,000 years ago at a distance of 163 parsecs. Low-velocity hydrogen data show a clear cavity, a structure indicative of regions evacuated by old exploding stars, centered on the spatial coordinates of MI. The invisible companion of the yellow giant star, 56 Ursae Majoris, may be the remains of the supernova that evacuated the cavity and blasted MI itself outward at the observed high velocities. Because the distance is close by astronomical standards, the mass and energy of MI are easily in line with what is expected from a supernova.

“Ironically, this scenario for MI only came together because we were exploring low-velocity gas in the direction of high-velocity clouds,” said Gerrit Verschuur, a co-author on the paper who has been studying HVCs for much of his career. “If this supernova model is correct, it gives us a definitive distance to MI.”

The giant star known as 56 Ursae Majoris is near the center of the MI cavity. It is part of a binary system with an orbital period of about 45 years. Its invisible companion had been identified traditionally as a white dwarf, but if it were a neutron star, it could be remains of the supernova explosion that created HVC MI.

Observations of 56 Ursae Majoris spanning many years only recently covered the full orbital period. The historical uncertainty in the basic orbital properties allowed for the possibility that the mass of the companion was consistent with that of a white dwarf. However, the more accurate orbital determinations made possible with new data from Gaia have now confirmed that the unseen companion is indeed a neutron star.

Researchers could only explore this scenario for MI because 56 Ursae Majoris survived the supernova explosion of its binary companion. The Galaxy could be littered with the corpses of dead stars that produced other anomalous-velocity gas features, but without a bright companion, these hypothetical neutron stars are all but invisible to us. As a result, other explanations for the larger-scale distribution of anomalous-velocity hydrogen are still very much in play.

The origin of HVCs continues to be a hotly debated topic, and it now appears that different mechanisms may be responsible for different complexes. Some HVCs could have been part of another galaxy that was disrupted by a close encounter with the Milky Way. Others may have been ejected from the Galaxy and are only now falling back.

If these results for 56 Ursae Majoris and its invisible companion prove true, then MI will be the first HVC with both a well-determined distance and a clear-cut origin story.