2018 Space Symposium: Influential Voices Cooperating on Return to the Moon

2018 Space Symposium: Influential Voices Cooperating on Return to the Moon 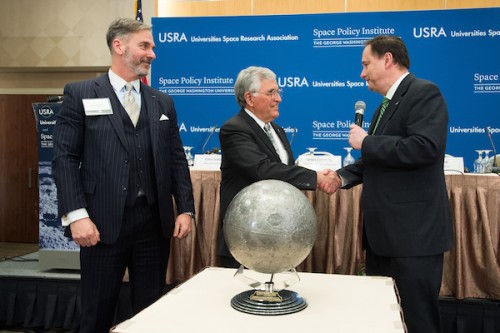 Washington D.C--March 27, 2018. The 2018 Space Symposium sponsored by the Universities Space Research Association and the Space Policy Institute of the George Washington University offered interesting insights into the mission of returning to the moon.

It was clear from the panelists talks that sending Astronauts back to the moon for the first time since 1972, and eventually to Mars and other deep space destinations called for under President Trump's Space Policy Directive will require new technologies, funding and collaboration among universities, businesses, and governments, both domestic and international. It was the first time that industry, academia, and government were all in agreement that the Return to the Moon will require a new level of cooperation of the various groups of scientists and engineers. As one of the panelists, Clive Neal, Professor at the University of Notre Dame discussing the importance of going to the moon to enable later sustainable human missions to Mars noted , "This is not the old moon of Apollo. We've got a new view and universities have been heavily involved in making that a reality."

The Honorable Harrison Schmitt was honored for his contributions and was presented with a limited edition globe of the Moon by Dr. Jeffrey Isaacson, President and CEO, Universities Space Research Association, and NASA Administrator, Robert Lightfoot.

Innovative entrepreneurs and experts joined by U.S. and European Policy makers explored the use of a moon as a staging platform for testing new systems and mining its valuable resources and strategies for aligning U.S. commercial, civil, and defense space initiatives with those of other nations under the Outer Space Treaty.

NASA Acting Administrator on Future of Space  isavailable for viewing in the C-SPAN Video Library.

The full videos are available on YouTube at the following links: